The Waldsiedlung (forest settlement) is located 35 km north of Berlin and is today owned by Brandenburg Klinik and developed as a huge leisure and rehabilitation holiday resort. The area is located 4.5 kilometers south-east of the town of Wandlitz and 7 kms north-west of Bernau. The access road by car to the area is Wandlitzer Chausse (road 273). A sign gives directions to the “Brandenburg Clinic”. It is not possible to reach the former houses of the communist leaders by car. You have to park at the access road, the Brandenburgallee, or in the nearby Offenbachstrasse. From there it is 300 meters by foot to the houses, which are located in the north-west part of the area on the following roads: Bussardweg, Habichtweg and Eichelhäherweg.
Public transport: Berlin S-Bahn (S2) to Bernau. From here it is approximately 7 km by bus number 894 in the direction of Klosterfelde/Wandlitzsee. Bus stop: Brandenburg Klinik. 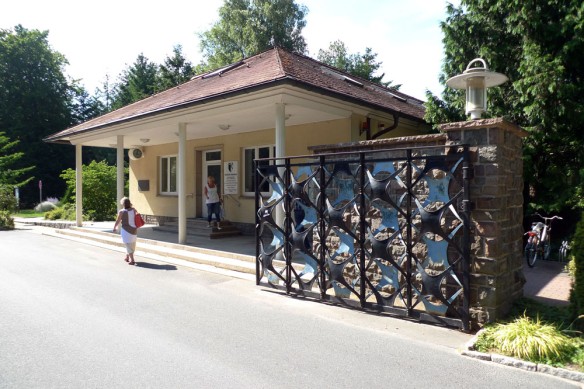 The former main entrance on the inner security ring. Today used for administration. 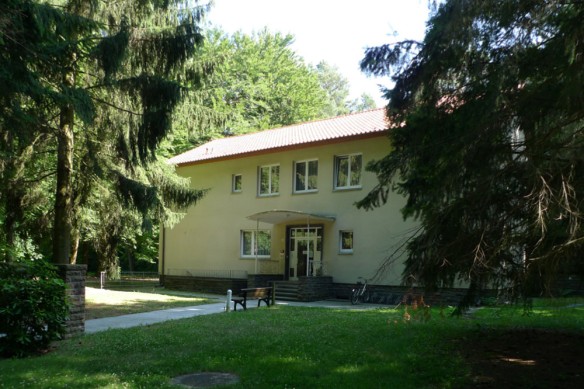 The house of Erich Honecker (1912–1994), the First Secretary of the Socialist Unity Party from 1971 to 1989 and, as such, the leader of East Germany. He died in exile in Chile. His wife Margot Honecker served for more than 20 years as Minister for People's Education. Erik Honecker was directly responsible for the construction of the Berlin Wall. 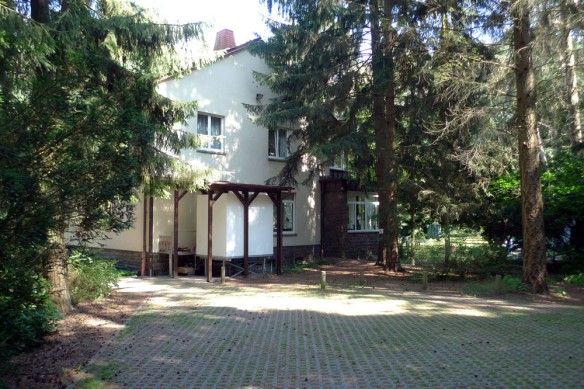 The house of Walther Ulbricht, the First Secretary of the Socialist Unity Party from 1950 to 1971 and, as such, the leader of East Germany.

Just prior to the uprising in Hungary in 1956, Walter Ulbricht, the General Secretary of the Communist Party in East Germany, feared for the safety of the communist leaders. Wandsiedlung Wandlitz was therefore built for the members of the Politburo. The area was hermetically sealed and it was not possible to see anything from outside. Local people thought it was a shooting range.

There were two security rings around the site. The outer ring was five kilometers long with a two- meter-high wall. The security personnel, around 800 men plus personal security staff, came from the STASI (East German secret police) and the so-called Felix Dzerzhinsky Guard (named after the first leader of the Russian secret police, KGB). There were also two bunkers inside the area, one for staff and one for families.

Wandsiedlung Wandlitz covers two square kilometers and was built in the period 1958-1960. There were 23 individual houses on two levels, with 7 to 15 rooms and an extensive number of facilities, such as a swimming pool, sauna, medical center, recreation center, tennis courts, kindergarten, cinema, restaurant, shooting range as well as buildings for service and security staff. It was possible to buy high quality products in the shops, even from foreign countries, goods that the ordinary East German population had no chance of buying.

The access road outside the area, Wandlitzer Chaussee (273), was constructed as a four-lane road with no central reservation, making the road suitable as a runway for aircraft.

AFTER THE FALL OF THE WALL

An extensive building and renovation program of the area began in 1990. It included new clinic buildings, 380 apartments (also outside the former Wandsiedlung), a sports hotel and congress facilities. The former houses of communist leaders were used for rehabilitation and hospital purposes. Around 600 people are employed in the area.