April-October every Tuesday and Thursday (in German): 10:00 and 14:00;
Other guided tours can be arranged for groups (min. 6 persons) in German and English
(advance booking is necessary). Projects and seminars can be arranged as well.

The PRORA-ZENTRUM in the north of Prora 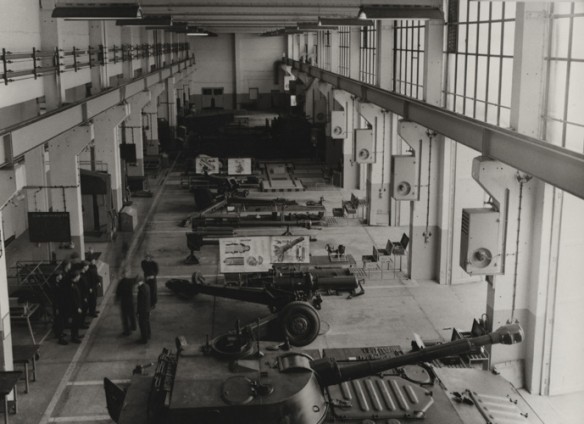 Ammunition Hall at the military base of Prora Outside exhibition, a project of PRORA-ZENTRUM and the organization of former spade soldiers (Förderkreis Bausoldaten Prora e.V.)

The NS  (Nazi) organization “Strength through Joy” originally intended Prora – the “Strength through Joy-Rügen Seaside Resort” near the resort of Binz – to be a tourist destination for 20,000 holidaymakers but it was never used as such. Contemporary propaganda, however, highlighted it as an example of social political achievement. The laying of the foundation stone took place in 1936 but, with the beginning of the Second World War in 1939, construction came to a halt and Prora became a place of “war-important purpose”: for training military units, as a refugee camp for bombed out people and evacuees, and as a field hospital. Parts of Prora were built roughly using forced labour.

After World War II, the island of Rügen fell under the Soviet occupation zone. In August 1949, the first squads of police were garrisoned in Prora and this was the beginning of the build-up of a camouflaged army.

During the time of the GDR (German Democratic Republic or East Germany) the “Kasernierte Volkspolizei” (KVP, Barracked People’s Police), established in 1952, extended the structurally complete buildings of Prora into barracks. In 1956, the “Nationale Volksarmee” (NVA, National People’s Army) was founded as the official army of the GDR. Now Prora was to become a military base with nearly 13,000 soldiers. During the “Cold War”, however, it was important to have flexible troops, and this was impossible on an island like Rügen. Prora was therefore turned into a base for military education at the end of the 1960s.

In 1962, the East German government brought in universal compulsory military service. Two years later, any conscientious objectors were given the option of doing special service within the army. They had to work as “spade” soldiers (“Bausoldaten”) in construction work. By 1982 Prora was the largest base for such soldiers in the GDR. The Prora spade soldiers had to complete their service by building the military strategic ferry port of Mukran, thus providing a direct connection between the GDR and the Soviet Union. Many of these spade soldiers were involved in the movement for a peaceful revolution during the turnaround in Germany in 1989/90. Prora has been a public area since 1992.

PRORA-ZENTRUM’s educational work is aimed at youngsters and adults and focuses on the history of Prora (under the Nazis and during the time of the GDR/East Germany). Exhibitions, documentation of research, guided tours and projects make it possible to grasp, analyse and classify this broader historic contemporary history.