April-October, every day: 10:00-18:00. November-March, Saturday-Sunday: 10:00-16:00, or by agreement. Bunker visits are only possible by guided tour. Individual tours can be arranged. Tours in English must be agreed in advance. Duration of tour: 45-60 minutes. The temperature in the bunker is 8-10 degrees so appropriate clothing is advised. The bunker owner is Götz Thomas Wentzel who also undertook the difficult and extensive restoration work. He grew up in East Berlin and trained as a metal worker. He later studied production, archaeology and Egyptology. From 1982 on, he staged large-scale concerts and public events in East Germany. In 1984 he became an independent producer, organising events in the Palace of the Republic in East Berlin, among other places. In 2004 he took over the Eichenthal Nuclear Bunker. He has been interested in bunker archaeology since 1990 and has co-produced a film about the Berlin underground stations that were taken out of service after the fall of the Berlin Wall (the so-called “ghost” stations). 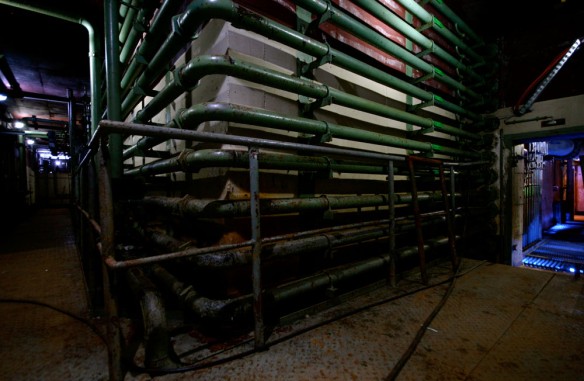 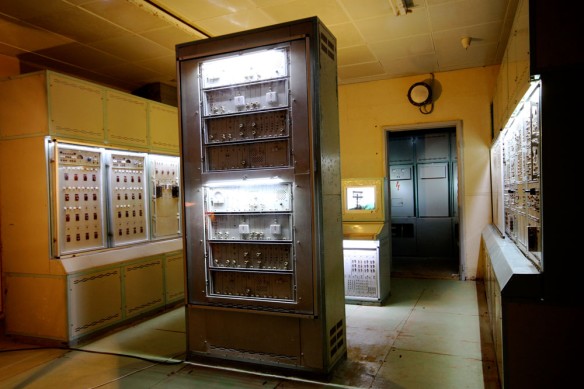 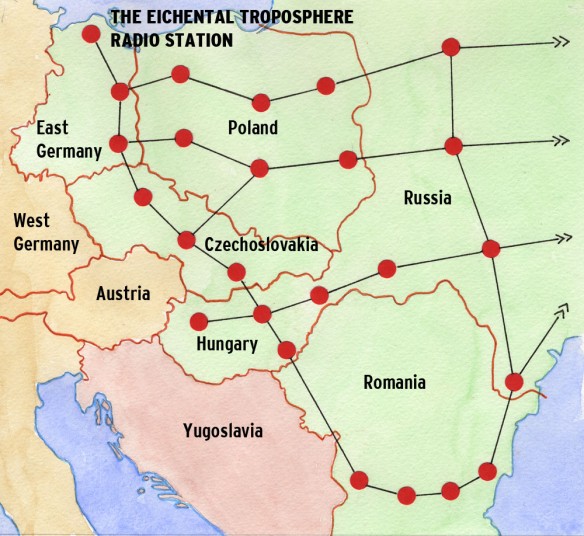 This sketch shows the Warsaw Pact’s extensive military information system, also known as BARS (from the first letters of the Russian words: protection, autonomous, radio and system). The system consisted of a network of 26 bunkers with a distance of 180-200 km between them. The Eichenthal Troposphere Radio Station was given number 302 (top left on map).
The main axis ended in command units of the Soviet Army around Moscow. All centers were built to withstand nuclear, biological and chemical attacks and were among the most secret military installations in the European part of the Soviet Union. “W” stands for facilities in the western part of the network, “S” in the southern part. The stars show the location of command units in the western and southern parts of the network respectively. A CORNERSTONE IN THE SOVIET MILITARY INFORMATION SYSTEM

The bunker was a communications center in the Warsaw Pact’s extensive military information network (see opposite page). The site’s official military name was Military Special Object 302. The Eichenthal Troposphere Radio Station (In German: “Militärische Sonderobject 302. Die Troposphären-Funkstation Eichenthal”). The bunker was constructed to withstand biological, chemical and nuclear attacks so that all necessary military information could still reach Moscow. It would even have been able to function following a nuclear attack just half a kilometer away (from a bomb 20 times stronger than that dropped on Hiroshima and emitting a temperature of 1,700 degrees). A specially-developed Soviet communications system could be put into effect if the traditional communications systems were destroyed (see description of the system on opposite page). The bunker was connected, via deeply buried cables, to regional military installations such as the marine forces on the Baltic coast, rocket installations and other army centers. The Eichenthal Nuclear Bunker was the last large bunker installation built in East Germany. It remained operational until 1987 and was sealed in 1992 following the break-up of the Soviet Union.

The bunker was taken over in 2004 by a private individual, Götz Thomas Wenzel. The bunker is on two floors and covers a ground area of 900 square meters. It took 7 months to pump out the groundwater, which had reached a height of 2 meters. The entrance is via a 180–meter-long tunnel with locked chambers and doors weighing 3.5 tons each. All the existing engines and equipment have been restored: diesel motors for electricity production, air cleaning and climate facilities, filters, pumps, etc. Most are still functioning today despite many years submerged in cold water. Wenzel himself says, with a twinkle in his eye: “Because it is the finest quality from East Germany” (or in German: “Prima aus DDR”). The bunker has now been declared an historical monument.

A dramatic re-enactment in the command room creates the illusion of a nuclear attack at the bunker. Supported by lights, tremors and noise (including commands in German and Russian), this is not advisable for pregnant women or people suffering from heart or other diseases that could be affected by loud noises or strong vibrations.