Chris-Gueffroy-Allee, by Britzer Verbindungskanal (Chris-Gueffroy Avenue by Britzer Connecting Channel. See also photo). Walk 150 meters north along the path at the former death strip of the wall, now a green area along the Britz district canal. Memorial stone to Chris Gueffroy, the last person to die trying to escape across the Berlin Wall. In the background can be seen the partly destroyed Wall, near the Reichstag building, 1989-90. 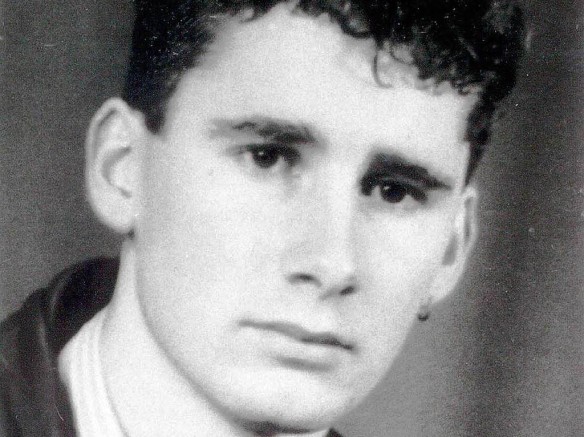 Britz Avenue between Treptow and Neukölln was renamed Chris-Gueffroy Avenue in 2010. A monument erected in 2003 at the site of the killing.

THE KILLING OF CHRIS GUEFFROY

20-year-old Chris Gueffroy (June 21, 1968– February 6, 1989) was the last person to be shot while trying to escape to West Berlin across the Berlin Wall. One of the main reasons was that he wanted to avoid his approaching military service in the East German Army. He tried to escape together with a friend, Christian Gaudian. They believed that the Schießbefehl, the standing order to shoot anyone who attempted to cross the wall, had been lifted. Climbing the last fence, they were discovered and came under fire from the East German border guards. Gueffroy was hit in the chest ten times and died immediately. Gaudian, badly injured, was arrested and sentenced to three years’ imprisonment for attempted illegal border-crossing. Four months later he was freed on bail by the East German government and transferred to West Berlin. Chris Gueffroy’s mother Karin got this mendacious message from the East German authorities: “Your son has committed an attack on a military unit. He died a few hours ago”. A monument was erected in 2003 at the site where Chris Gueffroy was killed and on the day that would have been his 35th birthday. Britz Avenue between Treptow and Neukölln was renamed Chris-Gueffroy Avenue in 2010.

THOSE RESPONSIBLE FOR THE KILLING

The four border guards involved in the killing obtained an award and a prize of 150 East German Marks each. However, following the reunification of East and West Germany, they were prosecuted by the regional court. Two of them were released and one received a suspended sentence. The last, Ingo Heinrich, who was responsible for the fatal shot, was sentenced to three and a half years in prison, later reduced to two. Two officials of the East German communist party, Siegfried Lorenz and Hans-Joachim Böhme, were tried for the death of Gueffroy and two other young men but the judge could find no evidence that they might have been able to lift the shoot-to-kill order. The two men were, however, later found guilty and given suspended sentences of 15 months each. This was the last case concerning deaths on the inner German border and it took place in 2004. East Germany’s ex-leaders always denied they had ordered soldiers to shoot people trying to flee across the wall. However, documents found in 2007 proved that such an order did exist. “Don’t hesitate to use your weapon even when border breaches involve women and children, which traitors have often exploited in the past”. The order is dated Oct. 1, 1973.