The Cafe Sibylle houses a permanent exhibition on the street’s history.

Tours can be arranged through Cafe Sibylle, for example a tour to the roof, with a view of the Allee.

Karl-Marx-Allee, Berlin. Stretches from Alexanderplatz to Frankfurter Tor.
The 2.3-kilometre-long and more than 100-metre-wide Allee was built in Communist East Berlin between 1952 and 1960. It is today an historical and architectonic memorial to, and attraction from, the Soviet era. Its architecture was borrowed from the Soviet model and supplemented by architectural elements of German regional building traditions. Karl-Marx-Allee can be described as “new German architecture of national tradition” created by the DDR.
Website: www.karlmarxallee.eu 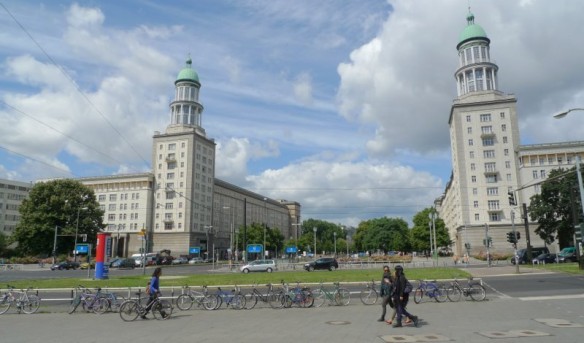 Karl-Marx-Allee can be described as “new German architecture of national tradition” created by the DDR.
Its architecture has elements of regional building traditions, especially elements of Prussian classicism. This can be seen in the two Frankfurt Towers at Frankfurt Square. It is said that the two domes are in the image of the dome of the cathedral on Gendarmenmarkt. This cathedral was destroyed in the Second World War and, at the time the Frankfurt Towers were built, it was not yet known if it would be rebuilt or not. 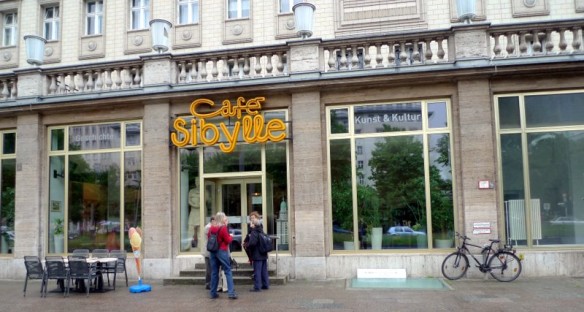 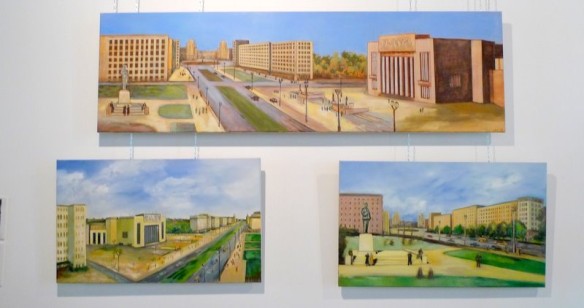 Café Sibylle. From the permanent exhibition on the streets history. Karl-Marx-Allé 72. Kino Kosmos was one of the most popular cinemas in East Berlin. There was room to seat 1,000 people in the big ecliptic auditorium that was the original part of the cinema. After rebuilding, there was seating for 3,400 in 10 auditoriums. The cinema was also the site of cultural festivals, including a yearly Soviet film festival. Karl-Marx-Alle131 A.

The Karl Marx Bookstore, known from the film The Lives of Others. The bookstore is now closed. Karl-Marx-Alle 78. The inside of the former Karl Marx Bookstore with original furniture. Karl-Marx-Alle 78. 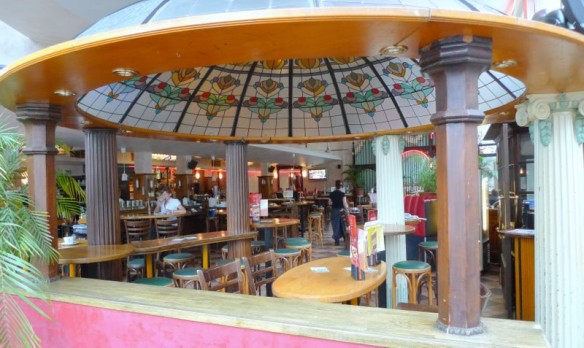 From the inside of Albert’s ice cream bar, with original furniture. Karl-Marx-Allee 35. he "Kino International" has an interesting functional architecture. The original interior is still intact. Decoration at the entrance to the former Café Moscau. The 2.3-kilometre-long and more than 100-metre-wide Karl-Marx-Allee was built in Communist East Berlin between 1952 and 1960. It is today an historical and architectonic memorial to, and attraction from, the Soviet era. Its architecture was borrowed from the Soviet model and supplemented by architectural elements of regional building traditions, especially elements of Prussian classicism. Karl-Marx-Allee can be described as “new German architecture of national tradition” created by the DDR.

The original name of the boulevard was Grosse Frankfurter Strasse. In 1949, it was renamed Stalinalle as a gift to the Soviet leader Stalin on his 70th birthday. In 1961, five years after the official condemnation of Stalin, the boulevard was again renamed, this time to its current name, Karl-Marx-Allee, after the Communist philosopher Karl Marx.

A historic exhibition on the street can be visited in the Café Sibylle, formerly a dairy. The cafe is run as an educational and training centre for young people.

The street and its buildings must be seen as an international memorial to former East Berlin. Its planning and building qualities were never again matched by the Communist authorities. As the DDR became financially weaker, and in fact eventually bankrupt, residential areas of lower standard were generally built, often little more than new slums, both in terms of the technical standards and the surrounding environment.

During the Second World War, Berlin was almost completely destroyed. The basic clean-up was undertaken voluntarily, and manually, by some 2 million women. Karl-Marx-Allee was a flagship project and the most ambitious rebuilding project in East Berlin.

The apartments were of a high quality with many modern facilities such as district heating, hot water, fitted cupboards, tiled bathrooms, waste chutes, door phones, lifts and bathtubs.

The ground floors of the residential buildings were dressed with classical details. The bases were clad with stone. The façades above were faced with ceramic tiles from Meissen.

The area incorporated all kinds of facilities such as shops, restaurants, cinema, hotel, schools, high school and public offices.

Some speciality shops never opened for lack of goods. Karl-Marx-Allee was a focal point of the 1953 uprising. Construction workers began to strike and demonstrate due to national and socio-economic problems, gradually leading to a national uprising. There were also demands for political freedom and, as such, they represented a serious danger to the Communist state. The uprising was violently suppressed with the help of Soviet troops, and at least 125 people were killed.

The boulevard was later used for the May Day military parades.