Cross-section of the bunker with three levels, 7,500 square meters in all. The bunker is built of reinforced concrete. The top consists of a two-meter thick security roof. 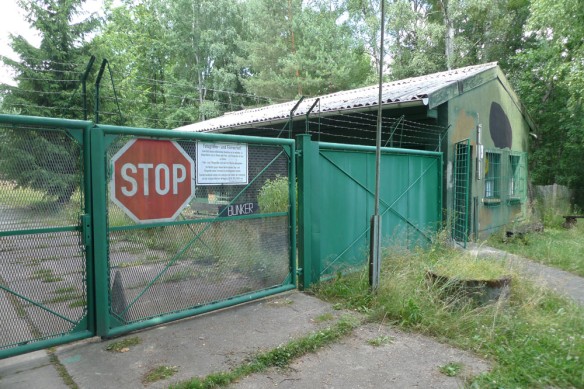 The entrance, with guard building. THE BIGGEST AND MOST SECURE BUNKER IN EAST GERMANY

The Harnekop Nuclear Bunker was the Main Bunker of the Ministry of Defense and the National Army in case of a nuclear attack on the country. Officially, the bunker was known and camouflaged as a Flight Weather Station.
It was the biggest and most secure bunker in East Germany, built in 1971, and the most modern of its time. 7,500 square meters are on three levels underground, each 63×40 meters. Up to 500 hundred people could survive here for 3-4 weeks in case of a nuclear or chemical attack.
The bunker was connected to the special alternative Soviet communication system of bunkers, the so-called Troposphere Radio Station system (BARS), which was able to function if other communication systems were put out of action by a nuclear war.
The bunker is today protected as a national monument.

The bunker consists, among other things, of command and control facilities for operations personnel, meeting rooms, rooms for ministers, canteen, kitchen, sleeping rooms, medical center as well as all sorts of technology needed for the functioning of an isolated bunker, such as water supply and cleaning, electricity generation, air cleaning and circulation system, climate regulation, waste treatment, etc.
The bunker has an extensive communication system with contact to all important military centers (“No contact, no control”).
The surrounding and high voltage fenced area contained facilities for the guards, ammunition depot, antenna areas, substation and a building for officers and office staff (opposite the entrance to the bunker). Outside the fenced area were barracks for the soldiers.