Currently we can only offer guided tours for groups. We can offer in several different languages. Prices always per 20 people. For example the Museum Tour: Guided tour around the whole exhibition of the DDR Museum. You can choose the time and your favourite apects. Duration: 60 minutes. 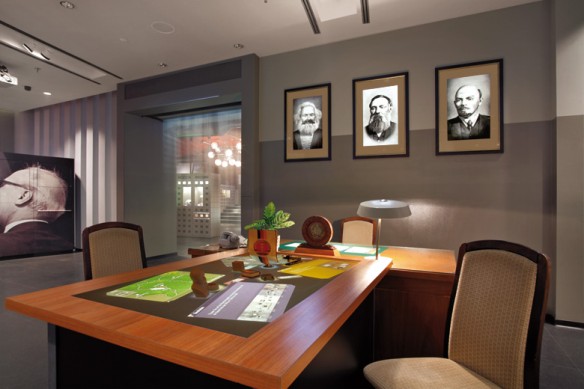 Multitouch Party Conference Standing in the centre of the GDR system was the omnipresent and omniscient party. Although there were a number of political parties in the GDR, it is clear that the Party can only mean the Socialist Unity Party. The locus of all power, it always implemented its will. In the second half of the exhibition, the SED is symbolized by a party conference. Working from this position, the Party controlled the various instruments of power (the first half of the exhibition) which kept it in its dominant position; this is then followed by an examination of its various activities and fields of operation. Journal of hunting:
»Everything is available«, people used to say, »just not at all times and not everywhere, especially not when you need it.« The GDR did indeed produce many high-quality products and was, economically speaking, the most developed member of the Eastern bloc. However, once you entered the stores or the small supermarkets, there was hardly any sign left of the economic power of this socialist country. The reason behind this shortage was the planned economy, which resulted
in a rather inefficient production and lots of red tape. All products were allocated by the government, with many a product arriving in the wrong place. Some products hardly ever reached the consumer, the reason being that they were destined to be exported. Ingeborg Lüdicke documented this shortage alsmost daily - her diary of shortage is a unique exhibit, because it shows, what not have been there. 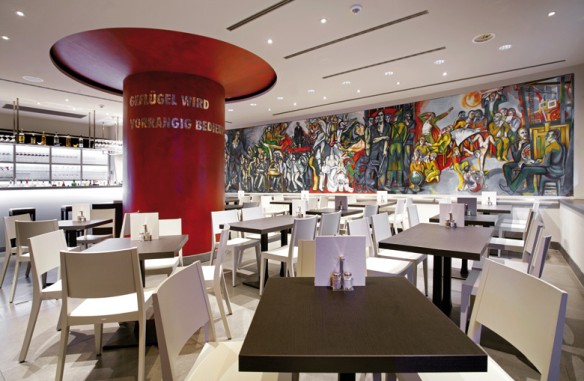 Mural "Praise of Communism" by Ronald Paris:
Commissioned in 1969, the artist Ronald Paris was given the clean new wall of the conference room of the GDR Statistics Office. Asked for a mural, he depicted the path to a Communist Society. Despite this rather official-sounding title, the SED were not entirely happy and made a list of 24 changes to be made.

Following its vacation by the Federal Office for the Stasi Documents, the building on the Alexanderplatz now stands empty, awaiting demolition. The only way to save the mural was to remove it - which proved to be no easy task. The weak nature of the mural plastering and the narrow corridors of its home made removing it a very expensive job indeed. Hearing of the proposed demolition, the GDR museum feverishly drew up plans to buy the work of art, paying for its removal and restoration under the leadership of Dorothee Schmidt-Breitung. To quarter it in the Domklause a concave wall had to be constructed especially for the task. The official opening of the GDR museum extension on 9 October 2010 gave Prof. Ronal Paris the first real opportunity to present his work to a wider public.

Everything waits to be touched and experienced: Open the drawers and closets, rummage through them and discover! The museum concentrates on everyday life in the GDR. It doesn`t only show the crimes of the State Security or the border defences at the Berlin Wall but we display the life of the people in the dictatorship.