The border tower is located in Kühlungsborn East directly at the beach promenade not far from the pier. Go up to the corner Strandstraße/Ostseeallee.

October to May: Tuesday and Friday, 2pm – 5pm 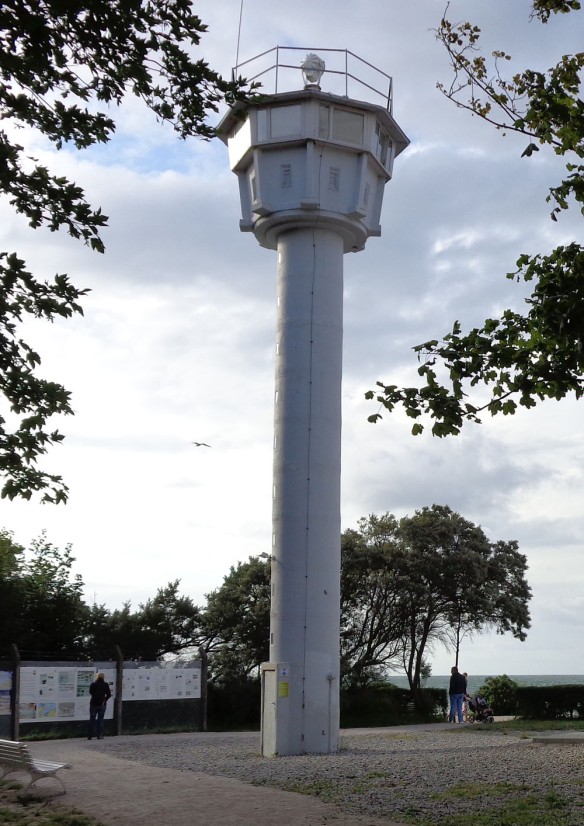 Border Patrole at the Beach during the Cold War Tower with Museum and Permanent Exhibition Breathtaking view and orginal equipment from the cold war

BALTIC WATCH TOWER ON THE BEACH AT KÜHLUNGSBORN. MEMORIAL TO THE COLD WAR AND DIVIDED GERMANY

The Baltic Border Tower Type BT 11, erected in 1973, was part of the border control system of the GDR. Its purpose was to prevent escapees from reaching West German or Danish shores. Generally, two soldiers were based in the tower. They operated the huge searchlights, scanning the sea at night. Using a special Radio Network System, border patrol boats or army units with helicopters could be immediately alerted. Most attempts to escape ended in tragedy.

After the fall of the Iron Curtain in 1989 the Border Brigade was resolved, most of the buildings and towers demolished.

THE TOWER: EXPERIENCE AN ORIGINAL WITNESS OF THE BORDER REGIME

In 1990, the citizens of Kühlungsborn and the new mayor saved the Baltic Border Tower from demolition and it was maintained as a monument for future generations. It is the only tower of its kind open to the public.

Climbing on the tower is a unique experience and gives an authentic insight of the sea border surveilleance. Beside the great view visitors have the chance to experience “hands-on“ original equipment of the border soldiers.

THE TOWER MUSEUM WITH PERMANENT EXHIBBITION

The exhibition tells the stories of numerous escapees with photos, artefacts and videos. the Exhibition is bilingual – in German and English. Original exhibits are displayed, one of them the escape raft of Family Kostbade who fleed in 1988 in a foggy night, travelling 40 miles on the cold sea. Various Objects, Charts, PC Terminals and Maps explain the history of the Sea Border with a local focus on Kühlungsborn.

The border assocciation has collected exhibits from esacapees as well as border soldiers. This makes the exhibition unique, showing both sides of the border history. Biographies of the former enemies, told by themselves are presented. Here World History is showed fom a personal point of view.

Especially vistors who never experienced the GDR and the Border can therefore esaily understand the topic by directly diving into the “cold war history“. It is quite common to find yourself eventually in the middle of a friendly discussion between former soldiers and escapees at the end of your visit at the tower.