SOME TRACES FROM THE DDR

See the photos and photo texts.

The building and sites described are: 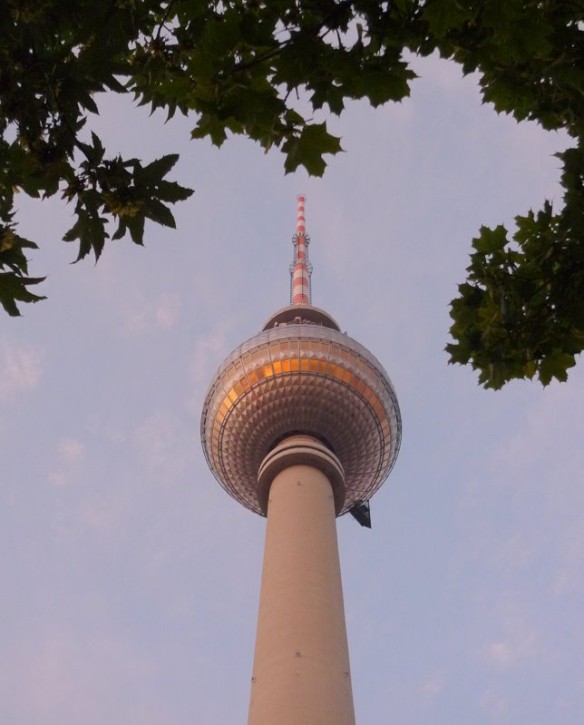 The Fernsehturm (TV Tower). The 368-meter-high tower, a landmark and symbol of Berlin, first came into operation in 1968. It is the fourth tallest freestanding structure in Europe after the TV towers in Moscow, Kiev and Riga.
The tower was built in Communist East Germany (DDR), thereby proving that they were able to build such a high and technically advanced tower.
The sphere of the tower is reminiscent of the Soviet Sputnik satellite. It was also originally intended that the sphere should give off a red glow (the colour of socialism). Instead, it was covered with metal plates that give it a golden glow.
The tower is one of the most popular tourist attractions in Berlin, with more than a million visitors each year. The sphere, 200 meters above ground level, incorporates a visitor platform, a bar and a restaurant. The restaurant rotates once every 30 minutes.
Information on opening times, tickets, the restaurant etc. can be found on the tower’s website: www.tv-turm.de

The Fountain of International Friendship. The fountain was erected in 1970 and consists of 17 shells from which the water cascades. The materials used in its construction were copper, glass, ceramic and enamel. The fountain is one of the square’s most popular attractions. 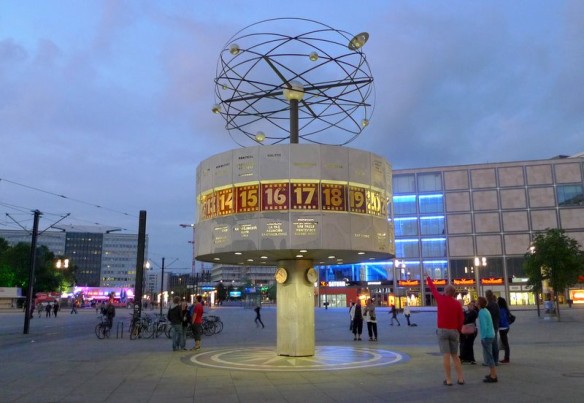 The World Time Clock was the most well-known meeting point in East Berlin during the years of the DDR. The numbers show the actual times in 148 selected cities around the world. The miniature globes on the top represent the solar system. 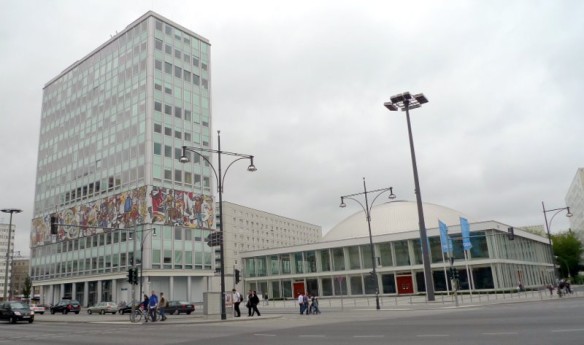 The Teacher’s House and Congress Hall. The complex was finished in 1964 and is a classic example of modern East German architecture: a sleek 12-storey building in steel, concrete and glass with a smooth façade. The low Congress Hall to the right has a domed roof.

The Teacher’s House and Congress Hall. The main building has a 127-meter-long and 7-meter-high wall frieze consisting of 800,000 glass stones illustrating the everyday life of school children in the DDR along with scenes of friendship and family life.

The House of Travelling. The house, finished in 1971, is located in the north-eastern corner of Alexanderplatz. It is a 17-storey building of two units with a typical DDR concrete decoration at the bottom, giving the appearance of waves and composed of identical concrete elements.
Under the decoration can be seen a large copper relief with the inscription: “The human being overcomes time and place”. 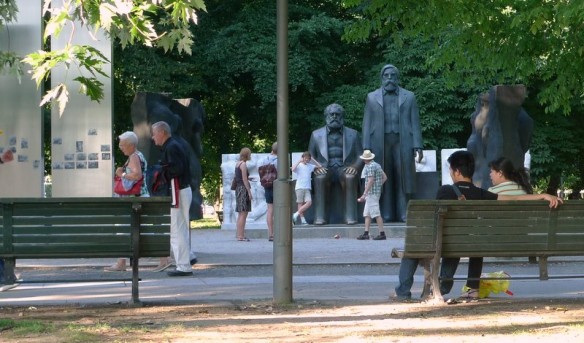 The Karl Marx and Engels statue. The statue of Karl Marx and Friedrich Engels dates from 1986 and has been protected as an example of East Germany's political self-understanding. Photos are etched onto 8 small steel plates in front of the statue to recall “the world revolutionary process of the working class movement”. Rotes Rathaus (Red City Hall) is now Berlin’s Town Hall. It can be found 200 meters south-west of Alexanderplatz, on Rathausstrasse. It is today the home of the Berlin Senate (Federal State of Berlin) and the Lord Mayor. The building takes its name from the red clinker bricks that were used in its construction.
It was built in 1869 in the north Italian High Renaissance style.
The building was heavily damaged in the battle for Berlin during the Second World War and rebuilt between 1951 and 1956. It was the city hall for the joint government of all sectors of Berlin until September 1948. Afterwards - located in the Soviet sector – it served as the town hall of the East Berlin Magistrate and the Communist Lord Mayor.