ANTAKALNIO CEMETERY. VILNIUS.
VICTIMS FROM THE JANUARY EVENT AND THE MEDININKAI MASSACRE

The main entrance of the cemetery is from Kuosų gatvė. The cemetery is located 2 kilometers west of Old Town in the forest area of Antakalnis district. 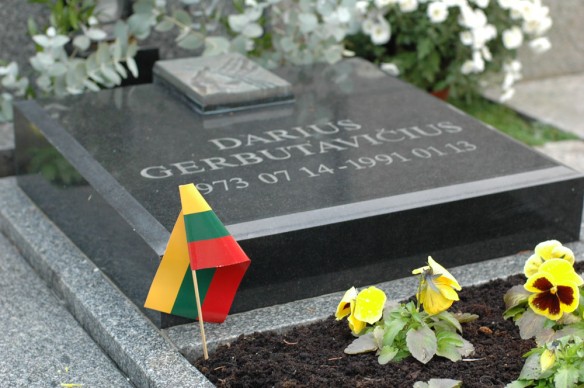 Photo of the victims of the events in 1991. The photo is from the memorial in front of the Parliament (Consists of a protected part of the defense wall built by people during the January Events). From the graves of the victims of the January events, 1991. Antakalnio Cemetery is also referred as Antakalnio Military Cemetery or Soldiers’ Cemetery . It was established in 1809.

The victims of Soviet military and security forces’ attacks during the January Events and the Medininkai Massacre in 1991 are buried here.

Fourteen people were killed by Soviet military and security forces in Vilnius in January 1991. Lithuania had already declared independence of the Soviet Union in March 1990. The Soviet leaders in Moscow and pro-Soviet groups in Lithuania were dissatisfied with the proclaimed independence. The new and democratic Lithuanian government then called on supporters of independence to protect the parliamentary building and other important public buildings, including radio and television centers. Hundreds of thousands of people all over the country responded to this call.

The Soviet military forces went into crucial action in January 1991. The fiercest attack on independence supporters took place at the Radio and Television Committee building and the TV Tower on 13 January. 13 freedom defenders were shot, one died of a heart attack and a Soviet soldier was shot by a fellow soldier.

On July 31, 1991, 8 Lithuanian policemen and custom officers were executed in Medininkai on the Lithuanian border with Belarus. They were killed by shots to the back of the head as they lay on the floor of the guardhouse. The executers were Soviet OMON forces from Riga.